SPARTAN RACE, A MENACE TO THE MODERN NORMAL 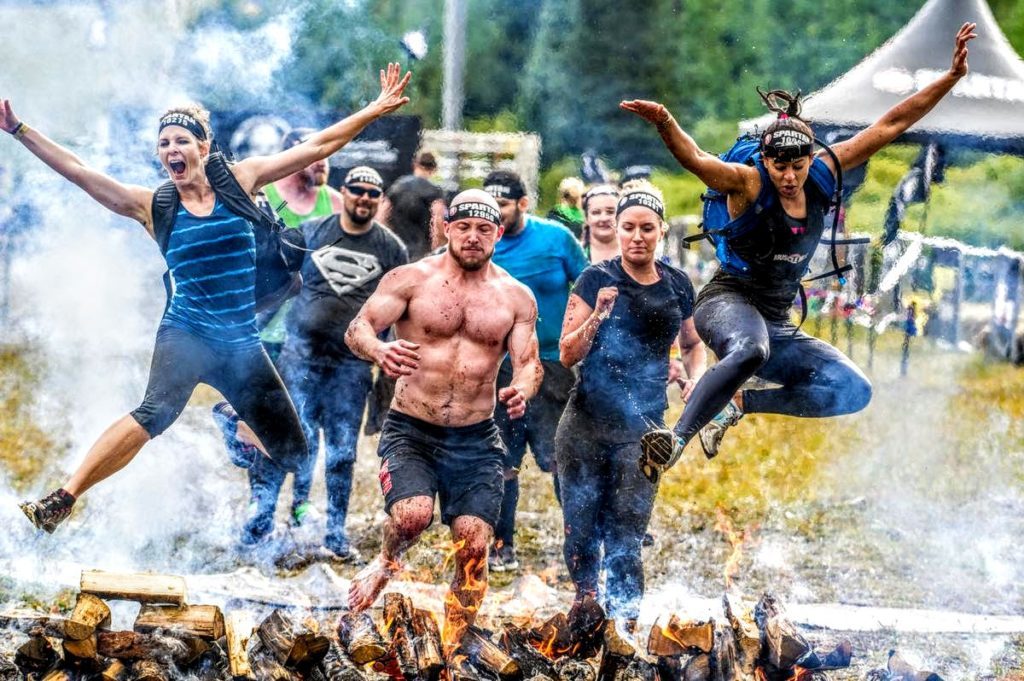 If you’ve never heard of Spartan Race, the first information you receive about it will probably disturb you.

To the average person, the pictures and videos of what happens on a Spartan obstacle course seem bizarre, insane, maladaptive, and counterintuitive: carrying heavy weights uphill, crawling under barbed wire, jumping over fire…Why voluntarily put yourself through this torture?

Why throw yourself (literally) back into the mud from which humans supposedly “evolved” long ago?

THE MAINSTREAM IDEOLOGY OF OUR TIME SAYS YES, YES WE ARE.

In the modern world, convenience is everywhere, and, by no fault of our own, we laud it as progress.

The faster we get what we want and the less we have to sweat, the better.

The ideology is so deeply rooted that even when our bodies physically revolt against our will to inertia, we bow yet again to the idea that controls us, and we attempt to placate ourselves with more convenient solutions sold in stores at “low, low prices.”

STILL, WE SERVE A FALSE CONSCIOUSNESS, AND OUR “SATISFACTION” ALWAYS LEAVES US WANTING MORE.

The reason why Spartan Race appears such a bizarre monster even to the most intelligent and reasonable onlookers is because, when viewed through the lens of our dominant ideology, the values of Spartan Race are a threat to normal life as we know it.

They are a threat to the pursuit of convenience and comfort, to an attachment to material things, and to the all-important idea that happiness can be bought, held in one’s hands, and placed on a shelf in one’s home.

AND WHEN SUCH VALUES—THE VERY ESSENCE OF THE MEANING OF OUR LIVES—FACE AN IMMINENT THREAT, THE BODY AND MIND RECOIL AND CONTORT IN AN EFFORT TO PROTECT THEM.

We hold our noses.

We close our eyes.

And we take these feelings as signal to step back.

In this way, we keep ourselves and our current beliefs safe, albeit at the price of other worlds.

Whether this is a fair exchange is up to the individual.

Of course, the revulsion is natural, and it’s not anyone’s fault. After all, people don’t get to choose their ideologies.People are born into families and communities that live and believe diverse truths; and even if a person comes to disagree intellectually with his or her inherited values, there’s always a palpable residue that lingers on long after.

Indeed, ideas—especially those that “go without saying”—are difficult to escape.

However, this doesn’t necessarily mean that we’re trapped.

But why? Why participate if everything in the mind says “no, no, no?” It’s counterintuitive. It’s irrational. It’s illogical. If the mind says no, surely the answer is no. Right?

Well, yes. If all of your common sense says “no,” then the surefire way to stay inside the world of “common sense” is to obey the “no.”

But the plurality of values in the world reminds us that there are many different ways of thinking that all call themselves by the same friendly name: common sense.

All are normal within themselves, yet anathema to one another. None is more true than the next, but the roads diverge in starkly different directions.

TO CHANGE YOUR PATH, YOUR WAY OF THINKING—TO CHOOSE A NEW NORMAL, IF YOU WILL—THERE’S AN ELEMENT OF FAITH INVOLVED.

Not religious faith, or faith in anything outside of yourself, necessarily—but rather faith in yourself and what you can become.

In many ways it’s a counterintuitive, irrational, illogical faith in yourself. There’s no proof, because this self doesn’t exist anywhere but in the future. And meanwhile, in the present, every fiber of your being tells you “no.”

If you looked at pictures of the action on a Spartan course and felt yourself recoil from the screen, consider the words of German-Swiss philosopher Karl Jaspers.

“Man is always something more than what he knows of himself. He is not what he is simply once and for all, but is a process; he is not merely an extant life, but is, within that life, endowed with possibilities through the freedom he possesses to make of himself what he will by the activities on which he decides.”

Through your freedom and your action, you have the power to evolve into a person that you may not even be able to imagine today.

ESCAPE YOUR OWN THINKING. DO WHAT YOU BELIEVE IS IMPOSSIBLE, IRRATIONAL AND ILLOGICAL.

And where you least expect it, you may discover a new normal.

David is Spartan’s managing editor. He’s been on board since 2012.