Suddenly silence swept the social media space of obstacle racers everywhere. All the chatter, Facebook posts, tips and tricks, recaps, reposts and shares of memories past came to a deafening halt. It was the morning of the 2014 Spartan Race World Championship. Over 10,000+ athletes traveled from every corner of the planet throughout the week for a chance to tackle The Beast that is Mount Killington in Vermont. Measuring in as the second tallest mountain in the state, a normally scenic fall destination, the town of Killington was blanketed in a fog just as dense as the one that recently covered a similar battlefield just a month prior on Wintergreen Mountain at the Virginia Spartan Super.

No matter which way you looked at it, it would seem the Virginia Super once again served as the perfect precursor to the Vermont Beast. This time it not only did so in difficulty but in the elemental arena as well. That morning the internet became a bit quieter than usual as athletes from all across the globe left their smartphones at the bag check leaving all their “connectedness” behind for a deeper connection with the people they call friends, competitors, and fellow Spartans. These athletes came to toe the line at the biggest obstacle race of the year; an obstacle race deemed so epic, just it’s soul crushing terrain itself was enough to send the ill-prepared home in tears. Throw in all manner of obstacles including many never before seen on US soil and you have the perfect formula for an event designed to make the best of the best drop to their knees and beg for mercy.

Even those who thought themselves properly fitted with the correct nutrition, hydration, and training received a cold, hardened slap to the face when confronting the mountain. If there were one piece of advice better than any other to be given before attempting the World Championship Beast, it would be this, “be stronger than the mountain.” With an elevation gain upwards of 9,000 ft and a distance that exceeded everyone’s expectations, there is no better motto. 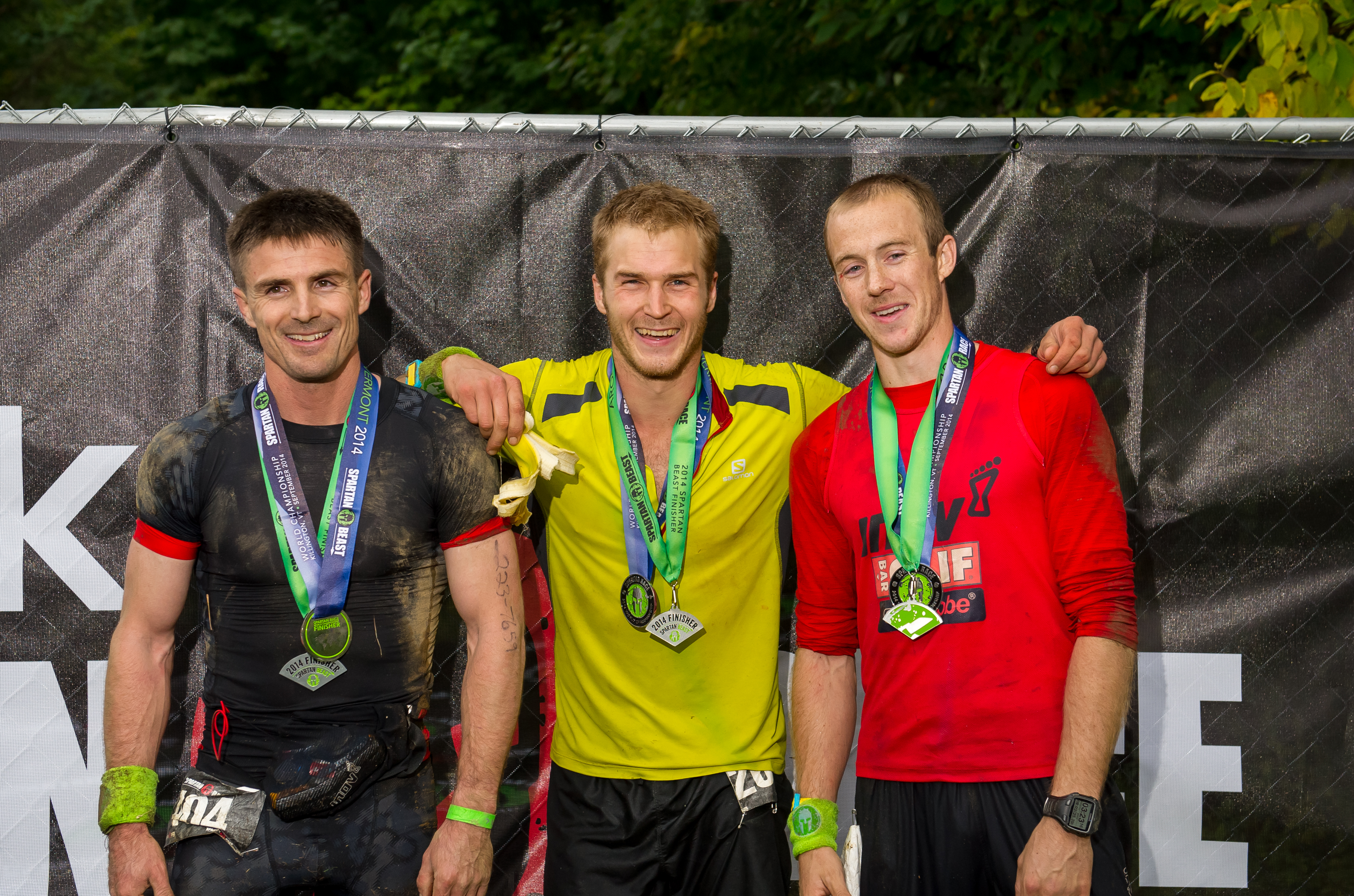 Victory never tasted so sweet for anyone who had ever gone up against mastermind Norm Koch’s devious courses, so brutal that the completion of his three mountain courses is now referred to as The Devil’s Trifecta. In the most astonishing Spartan World Championship to date, it was quite the surprise to see who rose and who fell during the battle. It wasn’t the US Spartan Pro Team that climbed to the top of the podium and emerged victorious over every other country. All season bets were being made, would it be Hunter McIntyre the young athlete from California, or would it be the hardened 40 year old, Matt “The Bear” Novakovich? All those bets were for nothing. This year, a man on a mission from across the pond crushed every obstacle, burpee, mile, and all the mountain ascents and descents in between to become the Spartan World Champion for the men.

Congratulations go to UK native Jonathan Albon. His win didn’t come easy, after a grueling battle on the mountain it came down to the final spear throw against Jonathan’s strongest competitor that day, Ryan Atkins from Team Canada. Nailing that spear gave Jon the gap he needed to maintain first place. Ryan put up quite the battle against Cody Moat and John Yatsko of the Spartan Pro Team who came in 3rd and 4th respectively. The rest of the Spartan Pro Team along with James Appleton of the UK rounded out the top 10. Hunter in 5th, Isaiah Vidal in 6th, Chad Trammell in 7th, Brakken Kraker in 8th, Glenn Racz taking 9th and James in 10th. “The Bear” came in 11th place after having cramping similar to last year’s encounter with The Beast of all Beasts. 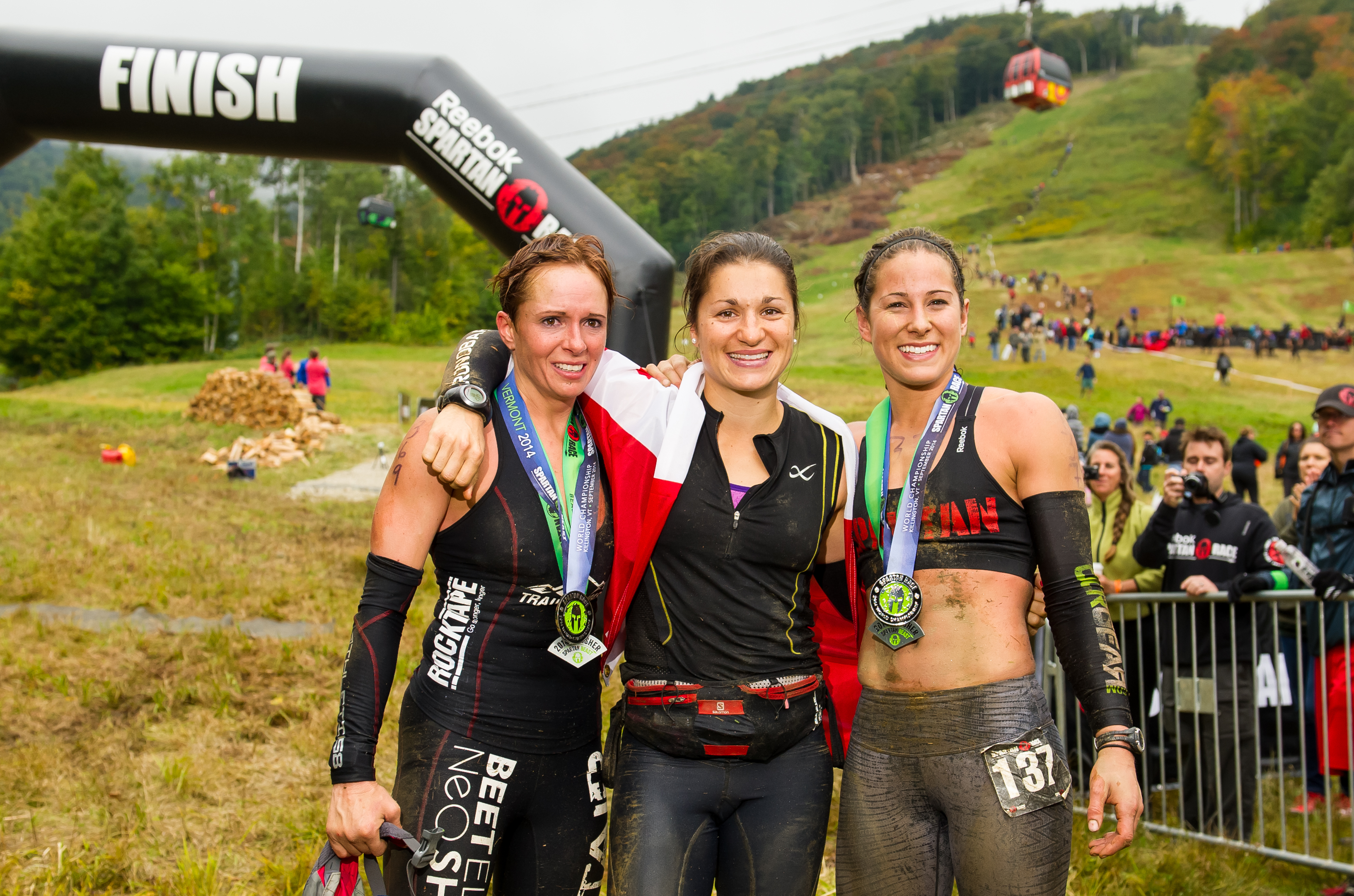 In the women’s division the mud covered crown went to Canadian Claude Godbout, who reclaimed her title as World Champ. In 2012 Claude bested Amelia Boone for the title, last year she placed 3rd. With Amelia out due to injury,the door was open for the new obstacle racing superstar Corinna Coffin to take 2nd place followed by Spartan Pro April Dee in 3rd. Rounding out the top ten women were Lindsay Webster in 4th, Tereza Klimešov in 5th, TyAnn Clark in 6th, Jackie Rust in 7th, Jenny Tobin in 8th, Rose Wetzel in 9th, and Rachel Paquette taking 10th.

Regarding the course, athletes unanimously agreed that the second sandbag carry destroyed nearly everyone. The male elites were required to carry two heavier-than-usual sandbags up one of the most awful inclines on Mt. Killington. There were times it looked like a death march, testing the spirit of every individual who conquered the most challenging sandbag carry to date. One can only wonder what kind of torment Norm will come up with next year. There’s no question about it, the World Championship tests athletes in the most demanding ways seen yet. Once again the weather played a role, but in this battle it favored some while it tested others. The dampness and cooler temperatures, especially during the swims,were enough to break some of the toughest athletes. For the gentlemen of the UK, Jon Albon and James Appleton both agreed the weather played to their strength as it was similar to what they were familiar with back home.

The Beast wasn’t the end of the competition that day. The top elites who qualified and accepted the challenge had the opportunity to take on the special short course. Unlike a typical Spartan Race with lots of running between obstacles the short course was designed to primarily test obstacle skill and ability in a rapid succession format. Hunter McIntyre dominated this course, even lapping some of his fellow competitors. The 10 top ranked athletes in the men’s and women’s divisions who accepted the challenge had to complete 4 laps of the short course , with the top 5 fastest times earning prize money. Each obstacle had a 10 burpee penalty. At the end of the ferocious battle Hunter McIntyre took first for the men, and Cassidy Watton clenched the win for the women. Coming in second for the men was Brakken Kraker and the World Champion, Claude Godbout for the women. Isaiah Vidal and TyAnn Clark both took third, with April Dee and Ryan Atkins coming in 4th, leaving 5th for the taking by Cody Moat and Carly Whipple.

It was a very busy weekend in Vermont, not only did the World Championship Spartan Race take place there, but on Sunday the beginning of the 2015 Point Series began with another round of the Vermont Beast taking place alongside the monster of all races, the Ultra Beast as well as the Charity Sprint where teams competed to win money for charity. For the Charity Sprint we saw Iram Leon’s team, Team Choose Joy, take home the $4000 prize which they donated to Livestrong. For the Vermont Beast we saw Grady Jackson in first, Joseph Casilio in second, and Jonathan Perillo taking third. Heather Cammarata returned for the women on Sunday taking first, Amy Michaelson taking second, and Heather Tetreavit in third.

While the Beast is a huge race, the main event of Sunday went to those brave enough to face Norm’s diabolical course for two laps for the Ultrabest with a spin on the second lap that included the addition of the short course and the removal of a section of the first lap. That left the overall distance close to 30 miles of mountain climbs and an abundance of obstacles. There were lots of opportunities for anyone to take the event. At the end of the day it was the young and relentless power of obstacle juggernaut Isaiah Vidal who took the win, proving just how unstoppable he is after having a solid performance at the World Championship the day before as well. Isaiah completed the course in a time of 9:41: Coming in second place was Simon Donato (9:58:41) and third was clenched by Derek Merkley (10:04:19). Of the women’s division, Rhonda Bullard-Augustine took first in a time of 11:14:27, followed by Helene Dumais who crossed the line 11:48:40 over April Dee who faced a burpee penalty at the monkey bars just before the finish landing the third spot on the podium in a time of 11:52:36. 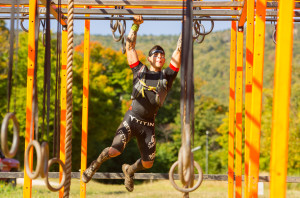