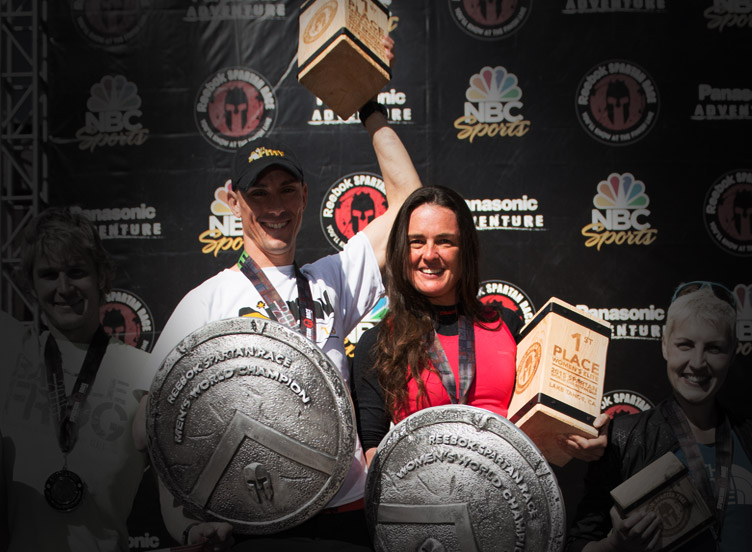 October 5th 2015 – In obstacle racing’s ultimate test of strength and endurance, Robert Killian and Zuzana Kocumova have been named 2015 Reebok Spartan Race World Champions. Finishing first amongst a field of thousands of athletes representing 15 countries, in front of a crowd of approximately 5,000 in Lake Tahoe, 33 year old US Military Captain Robert Killian from Longmont Colorado and 36 year old Zuzana Kocumova from Liberec, Czech Republic each earned over $15,000 in cash and prizes, along with the distinction of being named winner of the 2015 Reebok Spartan Race World Championship.

Set on the same hallowed ground as the 1960 Winter Olympics, 10,000 athletes from across the globe scaled some of the most challenging mountain terrain to compete for over $100,000 in cash and prizes. This comes as part of the $500,000 in cash and prizes Spartan Race will award during the 2015 race season — the largest amount in race history. Additionally, NBC was once again on hand to film all of the action, and will televise the Reebok Spartan Race World Championship on December 26th, 2015 at 5p.m. ET– a culmination of the network’s comprehensive season-long coverage of Reebok Spartan Race which began in early July.

“We continue to push athletes to new limits with our races,” said Spartan Race founder and CEO Joe De Sena. “This is the toughest race we’ve designed to date, most definitely. We can’t wait to show the world what we have in store for 2016.”

About Spartan Race, Inc.
Spartan Race—voted Outside magazine’s Best Obstacle Race— is the world’s leading obstacle race company and the first of its kind to feature timing and global rankings. With more than 120 events in 20+ countries planned for 2015, Spartan Race has more than 1 million global participants, and offers open heats for all fitness levels as well as competitive elite heats. With 4-plus million engaged social media followers, brand extensions such as Spartan Training, which includes Spartan SGX certified programs and coaches, and a popular NBC television series, Spartan Race has made obstacle racing one of the fastest growing sports—and lifestyles— in the world. Spartan Race features races at three distances, 3+Mile/20+ Obstacle “Sprint,” 8+ Mile/25+ Obstacle “Super” and 13+ Mile/30+ Obstacle “Beast,” culminating each year in the Reebok Spartan Race World Championship. Visit http://www.spartan.com for more information, a schedule of events, and to register for a race.

About Squaw Valley
Host of the 1960 Winter Olympics, Squaw Valley is a year-round mountain destination offering world-class adventures in every season. In summer, Squaw’s scenic aerial tram transports guests to elevation 8,200 feet to experience an array of exciting activities in a spectacular mountain setting including swimming, hiking, roller skating, disc golf and geocaching. At the base of the mountain, Squaw’s vibrant Village offers all new croquet, bean bag toss and a climbing wall, as well as shopping, al fresco dining, and music festivals all summer long.